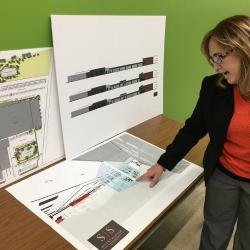 The 57-year-old family-owned testing business is in — partially so far — a former grocery-store-turned-department-store-turned-call-center dating back to 1968 that it purchased and is renovating on 11 acres off East Robinson Avenue in the Magic City.

For now, about 30,000 square feet of the 134,000-square-foot building is occupied by ARDL, which specializes in rubber, latex and plastic product and formula testing for a global clientele.

As renovations continue under the watchful eyes of company executives and architect Sara Stucky Sayner, ARDL, currently spread out among three buildings in Akron, eventually will be relocated into the Barberton facility. When the multimillion-dollar project is completed, a process that may take at least five more years, it will represent the single largest capital expenditure in ARDL’s history.

The company has 105 employees and years ago began exploring consolidating its operations under one roof; in 2016 it found the Barberton property.

While securing financing and getting the design work done played a part, the slow pace is intended largely to ensure that the company remains able to take on and complete customer projects without disruption, executives said.

Friday, employees and guests held a grand opening celebration for the first phase of the multi-phase project, timed to coincide with ARDL’s annual employee spirit day. The celebration took place outdoors, with employees wearing red ARDL t-shirts and munching on grilled burgers, hot dogs, and chicken and other food.

“We have three facilities now, two on Gilchrist and one on Kenmore Boulevard [in Akron],” said Tim Samples, ARDL’s chief executive officer and son of founder Robert Samples. (The new building is dedicated to its late founder.)

“So this facility will bring us all under one roof, and we haven’t been under one roof in 15 years,” Samples said. “So it’s really going to increase our efficiencies.”

“We are completely out of room,” he said. “We could not add people. We could not add equipment. We have equipment in warehouses that we can’t add because we don’t have the desks to put it on.”

“It’s a perfect building for us,” he said. Most of the building is one floor, which is important for the business and the work it does, he said.

“We have to be smart on our growth,” he said. “Akron Rubber Development is research and development.”

The company is hired to use its expertise to solve problems involving a wide range of items, from shoe soles and dog toys to NASA rocket parts for businesses and organizations in all 50 U.S. states and in 40 nations, Samples said. “Everything you could imagine. ... We test everything.”

Sayner, the building architect who is based in Canton, said the renovation, while not always easy, has been the greatest opportunity of her life.

“Renovating the building has been a labor of love,” Sayner said. “This project has been absolutely incredible.”

Part of the redesign involved turning what had been the back of the building off Robinson into ARDL’s main entrance, while the former retail building’s main entrance on the other side will be the employee entrance, she said.

It took a team effort of employees and public and private officials and entities to create ARDL’s Barberton campus, said Greg Simms, the company’s director of innovation & sustainability and the Barberton project manager.

“We’re 57 and we’re going strong,” Simms said as he addressed the celebration.

Financing for the project came from multiple sources, including the Barberton Community Development Corp. and a $2.52 million bond from the Development Finance Authority that is being used to make the 51-year-old building energy efficient.

Speak with an Expert